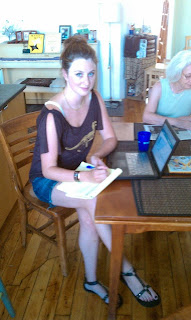 I've decided to participate in the "Music Success in 9 Weeks" blogging challenge brought you you by PR-Guru, Ariel Hyatt.  This will include 9 entries, one per week based on each chapter in the hopes of kicking my music career up a few notches (and hopefully winning the prize of some free PR to boot!)

Let me start with a brief introduction to put these entries in context.  I'm a singer currently living in Williamsburg, Brooklyn, and after singing and writing for the Indie Rock band, Dead Copycats, for the past several years, I've just finished recording my first solo project -- an album of 7 indie pop/rock songs.  Although I've lived in New York almost a decade now,  I've quit my administrative day job as of September 1st in order to pursue creative endeavors full-time.  I'll be heading to Europe in the fall for travel and touring, and then to Northern California to write a second album before returning to the best city in the world.  Should be an adventure, but it's due time, and I'm definitely up for it.  So!  This blogging challenge is just what I need to stay motivated and on-task.

Week 1 in "Music Success" is all about goal setting, small and large.  Take the first exercise, which is designed to facilitate positive thinking:  Ariel suggests keeping a daily journal of 5 successes,  even if they don't necessarily have to do with music.  Admittedly, I'm not one for journaling, but here it goes......(and man! is it difficult to think of 5 wins each day, especially over July 4th weekend when it's  all about celebrating and kicking back.)  Check out my list for day one:

1.  Sitting down and actually writing this blog entry
2.  Emailed my talented designer friend to help me out with album art (please!!!???)
3.  Had the moxy to talk up my cd release with strangers at a party last night (and get email addresses)
4.  Ventured out of my apt. in 100 degree heat to try out a new brunch spot (ok, ok, this one's a stretch)
5.  Created a sonicbids account for my online press kit

Like I said, this optimistic thinking takes training and hopefully it will only get easier.  Hey, thinking positively already!

Chapter 1 moves on from the merits of accounting for one's daily successes to acknowledging big-time goals.  I already did this particular exercise several months ago, so it's interesting to look back and check on my own progress.  As of April 2010, these were my 6 Big-Time Goals (and my since-then progress):

1.  Set up my own website featuring the sale of my new album.  The website is up and running: www.jessbraunmusic.com and the album will be for sale in September!!!
2.  Plan European tour dates for fall 2010.    Yikes, haven't contacted any club owners yet, but have done preliminary research on where I'd like to play.
3.  Plan record release party for September 2010.   Done.  Booked Cameo in the back of the Lovin' Cup in Williamsburg, BK on September 23rd.
4.  Book Summer 2011 tour dates in U.S.   Not even close to thinking about this one.  I have to move and travel Europe before this happens.
5.  Develop online presence by maintaining sites like twitter, facebook, myspace, sonicbids.  Yes, I not-so-secretly love stuff like this because I have so many awesome people in my life to keep tabs on.
6.  Write material for a second album by December 2010.   I'm going to go ahead and amend this particular goal to extend my deadline to Spring 2011.  I'm hoping to use my travel experience for material, and I'll need time to let it marinate.


As a former collegiate swimmer, goal setting is no strange concept to me, although in athletics, it's easy to measure success.  In the music industry, it's difficult to know where to start.  I mean, I know that if I do the same kick set in the pool each day holding a faster and faster interval, my legs are bound to get stronger, and my times will get faster when it's time for competition.  But in music, I can do all the vocal scales I want, but it won't help me sell any albums....well, only to a point.  So it helps to know after reading this book, that there are concrete steps that I can take, and the first step is thinking long and hard about what it is I really want and then counting successes as they come.  I'm already optimistic and excited to follow the 9 steps and see where they take me and my new album.