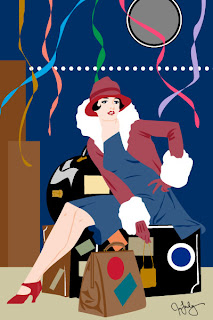 I've quit my job in NYC, and following my album release, I'll be boarding a plan to London.  Two months of adventuring abroad, then to Northern California.

Once my trip is over, I'll be continuing my voyage towards a sustainable music career.  And after completing this blogging challenge, I have an idea about what kind of effort that takes.

It's strange -- although I've been performing in New York City for years, I feel like my career is still in its early stages.  I'm really just starting out.  I have my first product available for sale this month!  I'm having my first solo show in two weeks.  My mailing list is still relatively small, and I've only been at this online promotion thing for a couple of months.  Following the steps in MSi9W has definitely opened my eyes to all of the legwork that I still need to do.  I've laid a lot of groundwork, but the process will need to continue for some time if I want to see any success.

In order to form any kind of continuum program, like the ones mentioned in the last chapter of Music Success, I'll need to build my fan base quite a bit.  This is the challenge for me at this stage, and I'll need to focus most of my energy here.  I'd really like to participate in a crowd-funding campaign since that's where I see the music business heading.  Once in California, time will be less of a luxury, and I'd like to use that precious resource to pursue crowd-funding to support my next album, possibly even a tour.  In exchange for financial support, I would grant a membership for lots of free downloads, access to rough mixes, access to videos of the recording process, even voting on which songs to include in the new album.  The campaign would serve as a continuum program because the people who participate would be acting as "producers" of the album, and would have a stake in it.

Over the next couple of weeks, post-blog-challenge, I'll be busy rehearsing for my record release show.  I'm planning on posting the entire album for sale, but I'd also really like to partner with a charity for one of the singles.  I recorded a song "Blue Muse", an ode to my favorite element, that I'd like to sell as a single, with the understanding that I'd give money to that charity. I was a collegiate swimmer and continue to be somewhat of a mermaid, so I think I'd like to support some kind of organization that teaches water safety to city youth, or perhaps an organization for cleaner waterways and drinkable water. I definitely need to do more research.


I can't write my last entry of the contest without looking back over the weeks and seeing the progress. I have a ton of ideas, and even better, I feel motivated and connected.  Overall this challenge has given me a strong sense of empowerment.  I've always known what I wanted to do, but in an industry where 15-year-olds sell the most albums, how the hell do I make a living?  Knowing the concrete steps I can take to make my career sustainable is an invaluable gift.  I'm only beginning my voyage, but now I have a trajectory.